If you’ve been thinking about getting involved in politics by working on a campaign, we’re here to help! Working on a campaign is a great way to get more women in elected office and can be a really rewarding experience regardless of the outcome. There are a lot of moving parts to a campaign, so we’ve created this guide to help you campaign like a boss. 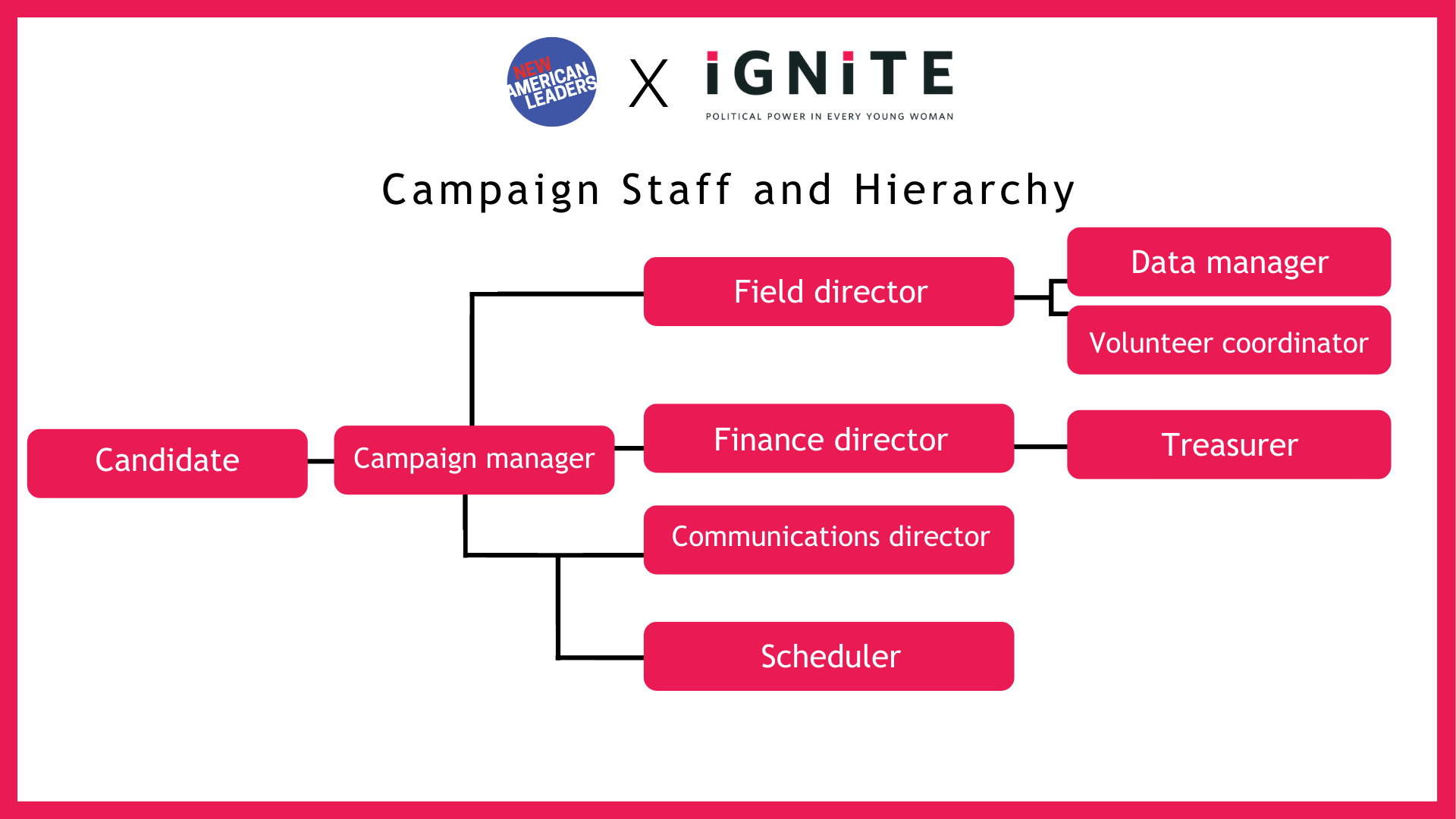 What is a campaign

Campaigning is a way to get voters to support a certain candidate by creating and executing a strategy. Part of this process includes creating the campaign plan itself, which we’ll cover later on. Now, let’s go over some of the most important elements of a campaign.

Making sure that there’s a budget to pay for the campaign and campaign staff is vital. This falls to the campaign’s finance director and/or treasurer, and the responsibilities include:

When budgeting for a campaign, there are a lot of things to account for. For example, phone banking is one element of direct voter contact, but campaign staffers might not want to use their own phones. Here, it would be important to budget for necessary tools like the phones themselves.

Overall, whoever is responsible for fundraising, and budgeting has to keep track of how much money is going where. Next, let’s talk about field operations.

Field operations are essentially how you’re going to get in contact with your voters and engage them. There are quite a few different ways to contact your voters, such as phone banking which we mentioned earlier. Below are some more ways to contact voters:

When it comes to field operations, it’s all about face-to-face contact. Door knocking and canvassing are effective methods for campaigning because it directly connects the candidate and their mission to the voter.

What three dates are important for field operations?

The communications efforts for a campaign are handled by the communications director and/or the campaign manager. Using different forms of communication, such as a website, emails or social media, the efforts they make help shape how the candidate is viewed by the general public.

Here are some more methods for campaign communications:

Communications can be one of the most expensive parts of a campaign, which is why it’s important to budget appropriately with the finance director.

Data is one of the most important parts of the campaign, it helps control the narrative of your campaign and provides you with powerful information. Using data, you can know what voters have been engaged, what donors have been involved in campaigns, and who they have donated to.

With this data in mind, you can tailor your communications to the type of voter (i.e. less engaged vs. more engaged). There are certain database tools that can be purchased, so make sure to do research on which one works best for the campaign. Next, let’s talk about how to create a campaign plan.

The campaign plan helps identify what is needed to win. It establishes your candidate’s credibility by providing structure and keeps the campaign team on track. A campaign plan should be written down so everyone can reference it throughout the campaign.

The campaign plan should be realistic in:

Below is a sample of a campaign plan. Keep in mind that it’s general.

There are three important numbers to keep in mind when creating a campaign plan, which can be pulled from the data.

*Calculating your WIN number should only be done in certain states.

Now that you know more about what a campaign is, who is on the campaign team and how to create a campaign plan, here are some general tips:

Ready to campaign like a boss? Start training with IGNITE today.