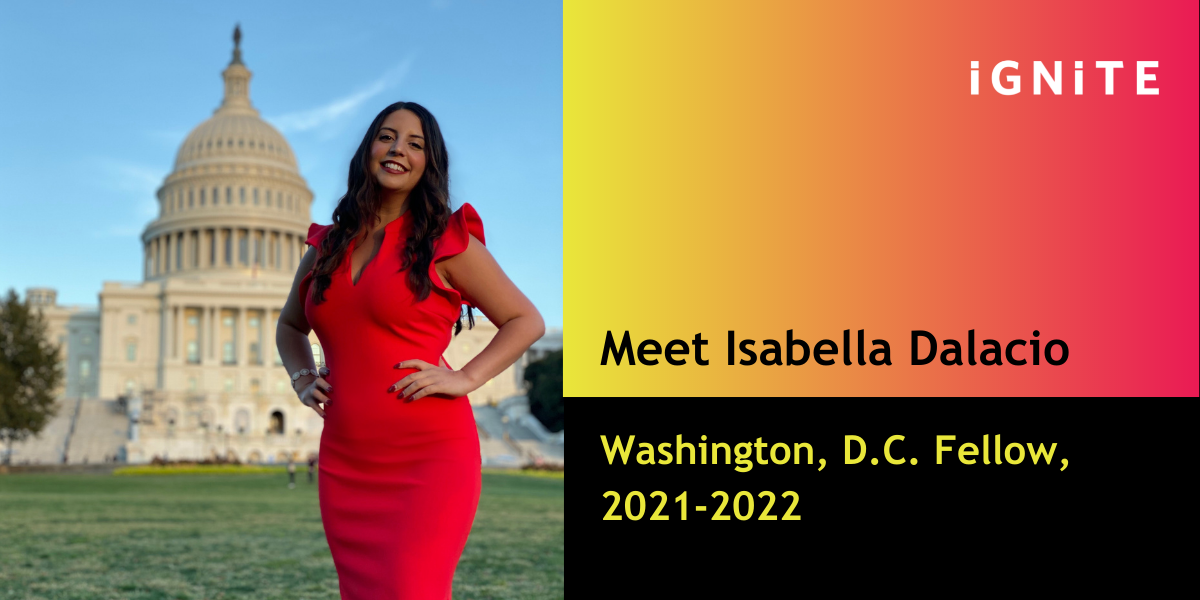 We are excited to announce our new D.C. Fellow for 2021-2022, Isabella D'Alacio! We recently caught up with Isabella to learn more about her and her goals for the Fellowship.

IGNITE: Isabella, we are so happy to have you joining our Fellowship! Can you talk to us about what motivated you to apply?

ID: I found IGNITE on Instagram and told my mom I wanted to go to Young Women Run New York as my birthday present. I had no idea about the organization, but travelled to New York by myself to join the conference because I knew it was going to be a beautiful community to become a part of. I see how many women at my school are inspired by IGNITE, and I think being a Fellow would be an amazing opportunity to connect all women in DC to feel the same community on a higher level.

Furthermore, I love how IGNITE focuses on addressing intersectional issues like systemic racism, and policing and how women can combat these inequities for increased representation in all forms of public office. I do a lot of work in the gun violence prevention movement as well as the immigrant rights movement. As a fellow, I would love to bring these perspectives to the table for IGNITE to increase awareness and highlight further reasons women don’t run for office, and why they should.

IGNITE: You’ve mentioned that you’ve introduced other young women to IGNITE. How do you plan to spread awareness about IGNITE and the importance of political engagement in your community?

ID: I plan to mobilize my community and get them excited about IGNITE by networking with my colleagues in various movements and showing them how IGNITE’s mission correlates to their liberation. Then, I will organize events to uplift each other’s work, and reach out to local DC chapters to put on community events. Finally, I would love to inspire other women by IGNITE’s mission by putting them in touch with IGNITE’s alumni and IGNITE’s network so that they can explore the vast opportunities they have to become civically engaged and run for office.

IGNITE: IGNITE Fellows are very involved in politics and activism. Can you share what your political leadership has looked like so far?

ID: I am a Policy Associate at March For Our Lives, I am on the Team ENOUGH Executive Council, I served as the Florida Relational Organizer at United We Dream Action during the 2020 election, and in 2020, I was named a Political Honoree by the Conversationalist’s LIST awards- which honors Gen-Z folks who have shown outstanding achievements in politics. For me, my advocacy has stemmed from personal experiences in each topic and wanting to make a profound difference in that area. Being personally connected to the Parkland shooting, and being a daughter of immigrants has caused me to see the injustices first hand that profoundly affect young people everyday. I have had experience organizing lobby days, analyzing policy, research, recruitment, advocating in the press, public speaking, and event planning to advocate and educate for radical change.

IGNITE: You seem to have a lot of experience in politics. Why is political and civic engagement important to you and why do you want to help other young women get civically engaged?

ID: Civic engagement is important because it allows constituents to not only hold their elected officials accountable for their actions, but also allows citizens to engage directly with their communities to create change. Civic engagement allows for the minority to have a say in what is affecting them on a daily basis, and allows for community-centered solutions to be proposed to issues that can not be solved on a general basis. Civic engagement empowers people to make change in their communities, and is the very aspect that has allowed society to progress into the future.

IGNITE: Speaking of creating change in communities, if there was one thing you’d want to change in your community, what would you change and why?

ID: Growing up in south Florida, I was incredibly apolitical because I did not realize how all the issues that had affected me growing up like being homeless, not having healthcare, and witnessing gun violence were things that could be solved through policy. When I moved to the DMV area for college, I realized how politically engaged many people were, and how much basic education I did not have because of where I grew up. If I could change one thing in my community, I would want to increase political education across my state so that people can understand how policy influences their everyday lives. I think that it is so important to empower those who are burdened by the systemic issues in this nation, and that can be accomplished through political education because they can learn how to take power over their own lives.

IGNITE: What does leadership mean to you and how does it show up in your work?

ID: I think true leadership is listening to others around you, and inspiring people to create change. For example, while working at March For Our Lives, I was listening to the legislative issues in the Southeast region. I noticed my students had expressed that their state legislators were creating many barriers to voting, especially in states that had high BIPOC voter turnout. After being a part of the Declaration For American Democracy, I had learned of the For the People Act which increases access to voting and refines campaign finance laws. I realized this would be the perfect bill for the Southeast region students to advocate for that could help protect their right to vote in their states. Therefore, I organized an advocacy day where each state got to speak to their representatives and tell them why this bill mattered to them. I think this was a very successful moment in my leadership because I was able to teach others how to lobby and think of similar solutions when they reach similar barriers in the future, and I mobilized around a common issue while getting everyone excited to participate. Leadership is all about progressing for the better of society, and inspiring others to do so.

ID: If you are someone who wants to get involved in politics, claim your own political ambition and see how you can make a positive difference in your community. Our world needs more powerful, kind, and educated women to take the lead in the world and that person can be you! I am thrilled to be the IGNITE fellow for D.C., and incredibly excited to work alongside such powerful women in the D.C. community. To anyone who may see this, feel free to reach out with any ways we can work together.

Isabella D'Alacio is the IGNITE Fellow for Washington, D.C.. Isabella is a student at George Mason University studying Government and International Politics and Conflict Analysis and Resolution. Growing up as a young Cuban woman from Pembroke Pines, Florida, she has faced homelessness, witnessed gun violence in her community, and lived the impacts of failed leadership. These experiences, coupled with her identity, have caused her to become a youth voice heavily involved in immigrant protection, women’s rights, and gun violence prevention work. Isabella has served as the Florida Relational Organizer for United We Dream Action during the 2020 election. She currently serves as a Policy Associate for March For Our Lives and on the Team ENOUGH Executive Council - all focused on youth activism. Isabella is a Political Honoree for The Conversationalist’s 2020 The LIST Awards due to her exemplary political involvement as a Gen-Z individual. For D.C. inquires, contact isabella@ignitenational.org.