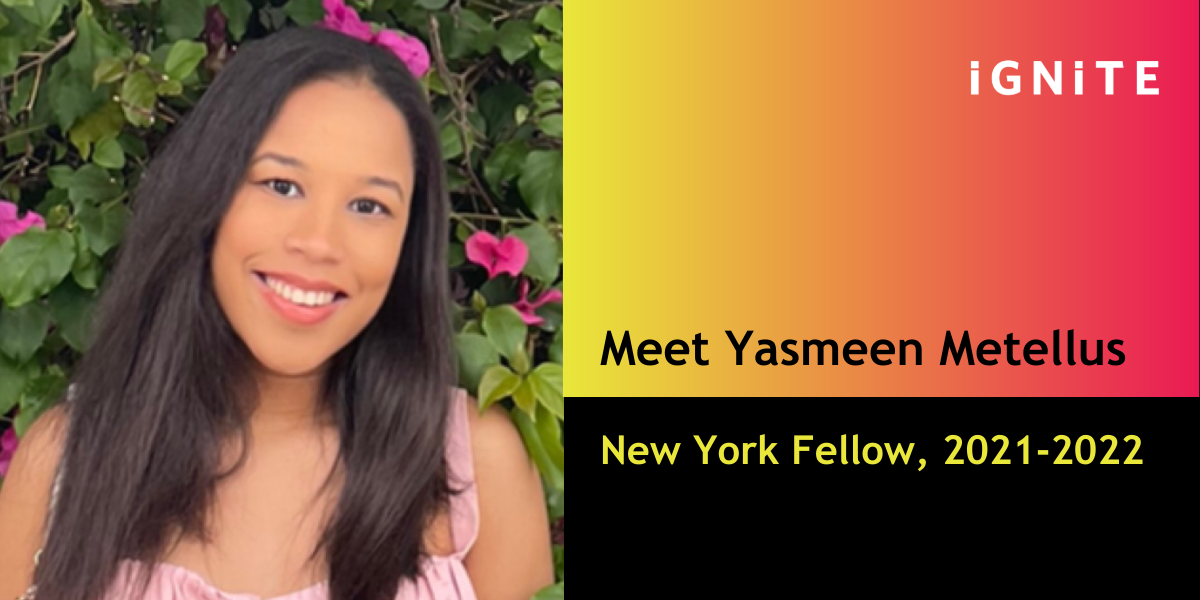 Big news for the East Coast! IGNITE is excited to share that Yasmeen Metellus is returning to IGNITE's fellowship for a second year. From Miami to the big apple, Yasmeen will be serving as the New York City Fellow. Unlike most returning fellows who serve in the same city in year two, she is switching it up. IGNITE caught up with Yasmeen to talk about leadership, political power, and the year ahead.

IGNITE: Welcome back, Yasmeen. Miami to NYC is a big change. Why take on the New York Fellowship when you've established a great community in Miami?

YM: When I first began this fellowship, I was looking forward to exploring a career in politics, but now after completing my first year, I am now certain that I want to pursue a career in politics and social impact. Because I am now certain of my career path, I applied to law school at NYU and got accepted. I'll be pursuing a career in public interest law. Since I'm not ready to end my time with IGNITE, I jumped at the opportunity to continue this journey as the New York Fellow.

IGNITE: Congrats on law school and on a second year as a fellow. What inspired you to pursue the IGNITE fellowship for a second year?

YM: It was an honor to serve as the Miami Fellow. This position has been absolutely life-changing for me. As a fellow, I was given the opportunity to expand IGNITE into three college chapters and add more than ten political professionals to our network. I loved hosting conferences and events for the Miami community. More importantly, this fellowship has given me the opportunity to make genuine connections with the women of Miami and within my fellowship class.

I have already spoken with Alicia, the previous New York Fellow, and from hearing her stories, I am excited to get to know the established chapters and expand the network in NYU, Barnard, and Columbia.

IGNITE: Looking beyond the impact you've made within the IGNITE community, what is one thing you want to change in your community?

YM: I am interested in sexual violence awareness, specifically on New York college campuses. Unfortunately, when I was a student at Columbia, I had to witness the difficulties sexual violence survivors faced on campus. Often, Columbia refused to recognize sexual violence crimes, especially related to crimes committed by members of fraternities.

IGNITE: What sort of work have you done for sexual violence awareness?

YM: As a student, I was involved with Go Ask Alice, a campus organization that provides support for students that are dealing with impacts of sexual violence, and this allowed me to learn more about the campus's unfair policies.

We advocated for the Campus Accountability and Safety Act (CASA). I was also given the opportunity to emcee IGNITE's Sexual Assault Awareness Month event last April. Currently, I plan to host an advocacy event for CASA sometime in June, and I would love to collaborate with different IGNITE cities.

IGNITE: Let's go back to your roots in the political world. Tell us a little bit about your political leadership experience.

YM: Through my internship with Chad Klitzman for Broward Supervisor of Elections, I gained experience in political strategy and organizing. I served as a program facilitator and helped manage interns. I was so able to design a social media strategy for the campaign. I produced content for Instagram, Tik Tok, Twitter, and Facebook, and as a result, I was able to expand the reach of the campaign and increase our news list for the campaign.

IGNITE: Any other highlights of note from the campaign world?

YM: I organized a phone banking campaign for a group of 70 interns. As a result of my organization of the program, I was able to coordinate over 4,000 calls within the first couple of weeks for my group of interns. I also coordinated a texting bank for the campaign and was able to reach over 4,000 voters through text. This campaign position has helped to strengthen my knowledge of campaign strategy, management, and social media advocacy.

IGNITE: As a year-second fellow, you must also have some great political leadership moments. What jumps out for you during your time as the IGNITE Miami Fellow?

IGNITE: You clearly live and breathe political leadership. Part of IGNITE's work is getting other young people excited about this work by explaining why civic engagement at any age is so important. Why it is important to you?

YM: In high school, I ran my school's first voter registration drive, and I was able to create get out the vote seminars for my student body; I also helped to register 500 voters. I started that initiative because I believed then and now that it is important to engage younger voters. My desire to engage with young voters continues in this present day. At Columbia, I helped host get out the vote events for our campus. In my last internship position, I helped register voters to apply for vote by mail ballots. I was involved in all of these activities because I believe that high civic engagement is important to a fully functioning democracy that is representative of all types of citizens. Currently, most voters are white adults over the age of 60; this indicates that many of our elected officials are not representative of the wants and needs of all American people.

IGNITE: We love to see it! You're changing the face of democracy one young woman at a time. How have you championed civic engagement as the IGNITE Miami Fellow?

YM: As a fellow, my desire to advocate for civic engagement has increased, and my definition of civic engagement has also expanded beyond voting. I have helped women plan community events to fundraise for women's shelters, and I have hosted political leadership seminars to encourage women to run for office. I now realize that civic engagement is beyond simply casting your ballot on election day, but it also means showing up for your community by protesting, hosting rallies and workshops, and actively communicating your desire to your elected officials. Through IGNITE's advocacy days, I have seen firsthand the impact of lobbying as a private citizen, and the importance of ensuring that you are using your voice to impact change in the community.

IGNITE: Let's talk about leadership. What does it mean to you? How does it show up in your work?

YM: Before I embarked on this fellowship journey, I narrowly defined leadership and a "leader' as someone who solves problems and effectively manages a team. After a year of working as a leader, I now realize that my old definition described a "manager" but not a true leader. The definition of leadership is much more expansive. Leaders not only problem solve but also help to develop their teammates and support their goals. Leadership is not so much focused on the leader as it is on the team.

IGNITE: And how will this new understanding show up for you as a second-year fellow in NYC?

YM: My time with IGNITE in Miami has taught me how to lead with empathy and support the goals of those around me. I try to exemplify empathy in my work by creating honest lines of communication and granting space for people to take breaks or express their concerns. I frequently have check-ins with my chapters, and I like to "temperature check" during these meetings so that I know if they are feeling overwhelmed. As the New York Fellow, I will continue to lead and recruit with empathy and understanding.

YM: I would say I identify with the role of the organizer. Thus far in my work, I have primarily focused on recruiting young adults and college students to participate politically in movements and campaigns. Most of my training has been focused on what it means to empower and educate a community. In the future, I want to continue to build my organizing skills and hopefully integrate that skill set into my legal career.

YM: I am just beyond excited to continue this journey with Ignite! It feels great to be back in New York again, and I am looking forward to building new connections and communities with the Ignite New York chapters.

Yasmeen Metellus is the IGNITE New York Fellow. She graduated from Columbia University with a Bachelor's in Political Science. Today, Yasmeen is a student at New York University Law and plans to pursue a career in public interest law. At Columbia, Yasmeen served as the co-founder and president of Columbia University Black Pre-Professional Society, which provides career resources for underrepresented minorities on campus. Yasmeen has held numerous internships, including NY State Senator Alessandra Biaggi, America Needs You, and Venture for America. She also served as the Campaign Program Facilitator for Chad Klitzman for Broward Supervisor of Elections. Yasmeen is passionate about voter education, diversity, and community engagement. Before her New York fellowship, Yasmeen served as IGNITE's Miami Fellow. For New York inquires, contact yasmeen@ignitenational.org.