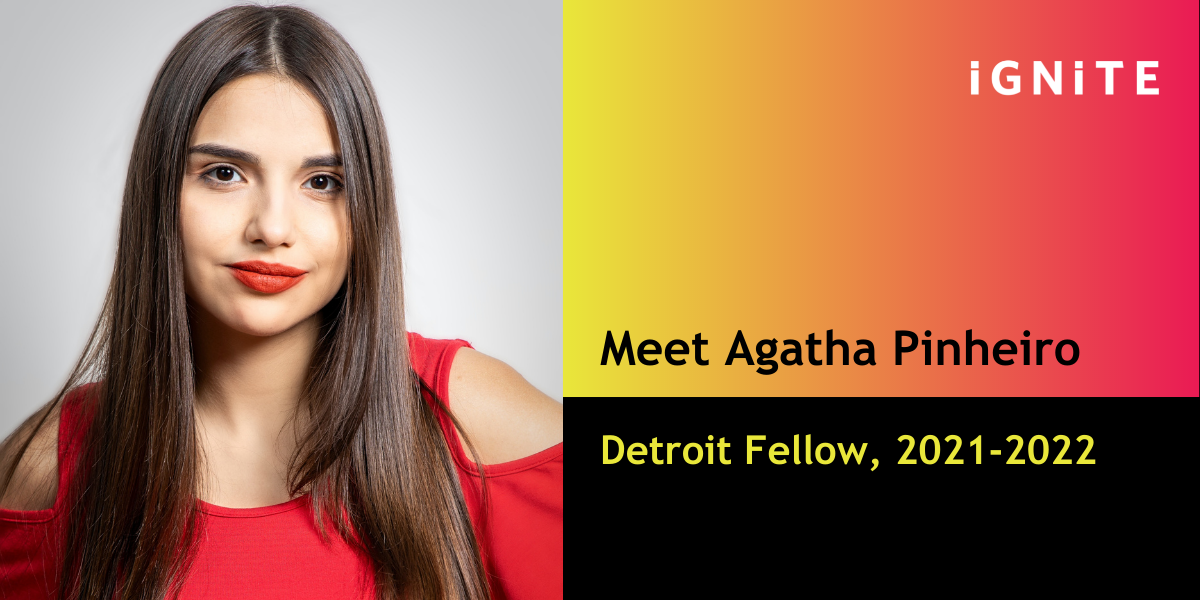 Today we are chatting with one of IGNITE's new Fellows, Agatha Pinheiro. Agatha will serve as the Detroit Fellow this coming year. We sat down to talk about civic engagement, working on campaigns, and what it means to be the Detroit IGNITE Fellow.

IGNITE: Agatha, welcome to IGNITE! Let's dive into these questions. Why did you want to serve as an IGNITE Fellow? 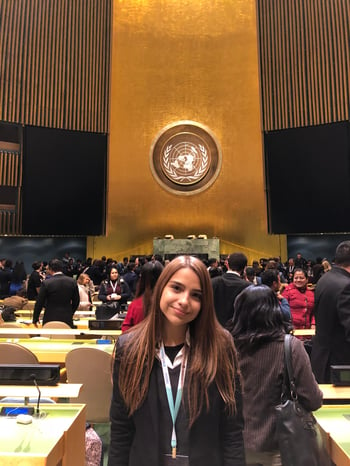 AP: As a young woman and immigrant, I faced many challenges to become involved in the political process. I was thrilled to learn that organizations such as IGNITE are building leadership and advocating for young women who plan on running for office. As a Fellow, I am interested in helping other people in my community to be engaged in the political arena. I want to use my experience to empower other girls and show that we all belong to the political arena.

IGNITE: We love to hear it! Any plans of your own to run for office one day?

AP: My biggest dream is to run for office and be an elected official. I have worked in three political campaigns and learned that running a campaign is not easy. There is fundraising, field outreach, social media, communication, policy, and so many other areas that need to be taken care of. This can be intimidating for someone who has never run for office before. Fortunately, IGNITE is here to help other women and me to achieve this goal.

IGNITE: What elected role do you have your heart set on?

AP: There are many elected roles that I consider, and all of them make me very excited! I would love to run for Congress one day, but before that, I want to spend some years as a local elected official, probably in the city council. Local election matters and there is a lot of work to be done in my community.

IGNITE: Politics and civics are all about solving problems and changing our communities for the better. What's something happening in your community that you want to change?

AP: Youth political engagement. As a young adult, I have many values shared by most of my friends. We all believe in respecting all gender expressions, and that diversity and immigration are essential for our country. We believe that healthcare is a right, not a privilege and that higher education should be accessible for all. It is disappointing to look at the US Congress and the state legislatures and see that most of our representatives do not share these values.

AP: One of the reasons why there is a disconnection from who we are as a country and who our representatives are is the lack of political engagement by an important sector of our society: youth. I want to change that and see more young people voting, running for office, volunteering, and participating in the political process as a whole. This way we can make sure that our representatives will represent us.

IGNITE: We couldn't agree more! You've clearly been part of the political world for a while to understand the importance of youth engagement. Share a little about your leadership. 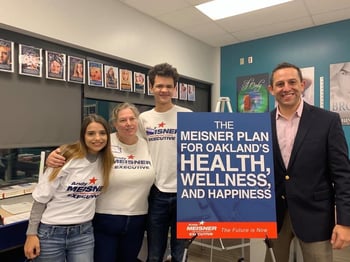 AP: I have worked in three political campaigns. My first campaign was Andy Meisner for Oakland County Executive. Oakland County has over 1.2 million people, and for the first time in almost 30 years, the County Executive position was an open seat. It was a critical moment for our county, and I believed Andy Meisner would bring essential changes to our community, such as regional transit, affordable healthcare, and debt-free college.

IGNITE: What was your role on the Meisner campaign?

AP: I started working in his campaign as a fellow, where my main tasks were canvassing and phone banking, but after showing great leadership, I was promoted to Deputy Campaign Manager where I oversaw the entire field team, including managing the Voter Activation Network, assisting with event organization and social media content.

IGNITE: And following the Meisner campaign, what have you worked on?

AP: I worked for Julia Pulver for State Representative as her Field Coordinator. I organized campaign events, recruited and trained volunteers for phone bankings and canvasses. Simultaneously, I was a fellow for Elissa Slotkin for Congress. My main tasks were phone banking and assisting with volunteer events.

IGNITE: And when you are not working on campaigns?

AP: I had smaller roles in other political projects, like volunteering for candidates I supported. I translated the phone bank script of a US Senate race in Massachusetts to Portuguese, served as a fellow with Rise, a nonprofit organization that advocates for free college, and was an influencer with Flytedesk and VoteAmerica, creating Instagram posts to increase the voter turnout in the 2020 Election Cycle.

Currently, I am a fellow at the Economic Justice Alliance of Michigan, where I have weekly training about social justice issues and a practicum internship assisting with the Michigan Unitarian Universalist Social Justice Network (MUUSJN). Last summer, I was an intern at Reproduction, a nonprofit organization that advocates for Reproductive Justice.

IGNITE: You clearly value civic engagement. Part of IGNITE's work is about getting others civically and politically engaged. How do you articulate this to others?

AP: A lot of people have an aversion to our politics and politicians. They say that our representatives are old corrupt men working in Congress only to their own benefit. Although the lack of diversity in Congress and corruption are serious issues, my answer is always that this is not what politics is about. Politics is about creating the right laws and the right policies that can help to solve societal problems.

It does not matter if you like the policies that the government is implementing or not. They will affect your life. The pandemic made it even more evident: Elections matter and the decisions made by our representatives will affect our lives. Civic engagement is about making sure that our values and our voices are being heard. Americans really value their freedom and control over their lives, but when we choose not to be engaged, we let other people decide our future. We need to have a government made by the people to the people, and the only way to reach this goal is through civic engagement.

IGNITE: "Government of the people, by the people, for the people, shall not perish from the earth…." we are the stewards of this democracy. How are you going to build a community around IGNITE and get people excited about joining this movement?

AP: When I was working in political campaigns, most of my tasks involved organizing people to get involved in our campaign. The most important lesson that I learned is that field organizing is not about recruiting volunteers or persuading undecided voters. Field organizing is about building relationships. When you build a relationship with someone, all of the other things come naturally. People enjoy being part of a community. I want people to feel that they have a community in IGNITE, a place where they can develop their leadership skills, make connections and learn.

IGNITE: Two more questions. Define leadership and share how it shows up in your work. 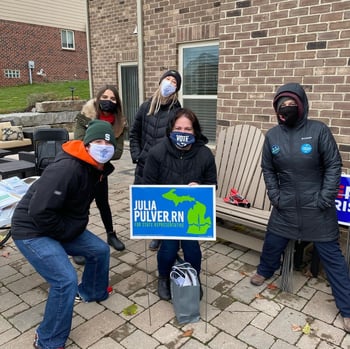 AP: Leadership is to bring people together to achieve a common goal. In my case, I have decided that I want to dedicate my life to social change. Whether it was working as deputy campaign manager for Andy Meisner for Oakland County Executive or as a Field Coordinator for Julia Pulver for State Representative, I was bringing people together to fight for a common cause. I believed that electing those candidates would bring progressive change to my community. I recruited and trained dozens of volunteers and had hundreds of conversations with voters. I organized events and contacted stakeholders and elected officials. While doing all of this work, my main goal was not to be better than anyone or to be in charge of anyone. My goal was to bring people together to fight for our cause. And this is what leadership means to me.

AP: As someone who has worked as a campaign staffer, I couldn't agree more with expanding the definition of political leadership. Personally, I see myself in the future gaining some experience in the policy-making process by pursuing a master's degree in public policy and working as a legislative aide or in a government agency and then running for office. I believe my immigration history can inspire a lot of people. That is why I would love to have the visibility that an elected official has, but without forgetting the importance of having experience with other types of political leadership.

AP: I am very excited to serve as a Detroit Fellow for IGNITE and can't wait to start working!

Agatha Pinheiro is the IGNITE Detroit Fellow. She is pursuing a bachelor’s degree at the University of Michigan, studying Political Science with a minor in Law, Justice and Social Change. Agatha researched the value of higher education for African-American students at the University of Michigan. She was also part of the Think Tanks and Civil Societies research program at the University of Pennsylvania. She has worked on county, state, and federal campaigns in which she has helped to engage voters and organize communities. Agatha also interned with Reproaction, a reproductive justice organization. In addition to her work at IGNITE, she serves as a fellow at the Economic Justice Alliance of Michigan. As an immigrant from Brazil, she is passionate about increasing the participation of minorities in politics, especially Latinas. For Detroit inquires, contact agatha@ignitenational.org.